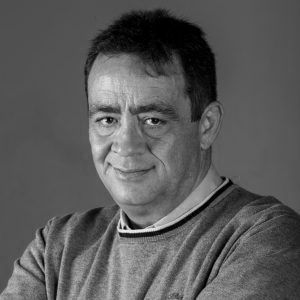 He defended his Master's thesis in Film Studies at the same University, with a Transmedia project "Lápis Azul".

He graduated in Cinema, Video and Multimedia Communication at Universidade Lusófona. Attended the Erasmus Program at SZFE (University of Theatre, Film and Television) in Budapest, Hungary, participated in the Digital Media Summer Institute, 2011, UT Austin | Portugal 2011 in "Convergence Culture" and "Transmedia Storytelling in the Contemporary Media Global Media" at the Universidade Nova de Lisboa, works at Impresa Group as Product Manager in the digital products and services department and is one of the people responsible for the implementation of the 360º VR technology in the Group.

Professor at Lusófona University in several graduations and master degrees in the areas of Transmedia and 360ºVR, Directed the short film "Moeda Viva" about the work of Pierre Klossowski, film selected for exhibition at the Cinemateca Portuguesa and Museu Berardo, "O Tenente" filmed in Super 16 mm about the creation of the Portuguese Republic in 1910 - first prize ICA / Lusófona 2010, ZON prize, won the III Odemira Digital Festival and the Augusta prize for best short film at Bragacine Film Festival.

The film was shown on SIC Notícias and in several national and international festivals. "A Special Christmas" filmed in Super 16 mm in 2010, screened on RTP.

Produced and directed the Transmedia project "Mutter" shown on SIC Radical, which had as main goal the development of a transmedia narrative that integrated different platforms and narrative and dramatic crossings, the project was awarded at ZON and was present in several film festivals, national and international.

Directed and produced the Transmedia project "Lápis Azul" about censorship in Portugal, composed of a fiction film and a documentary, the project was shown by SIC, SIC noticias and was in cinemas.

The project won the Sophia Award of the Portuguese Film Academy for best documentary short film, the prize for best original screenplay at the Caminhos do Cinema Português festival and the Augusta Award for best Portuguese film at the Bragacine Film Festival.