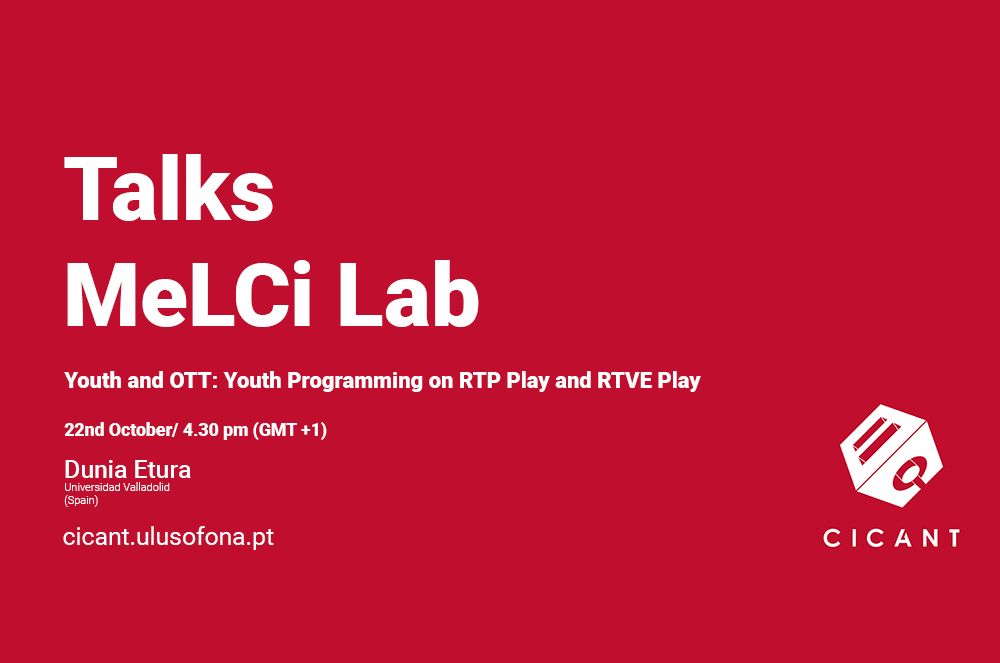 The next MeLCi Lab Talks event has Dunia Etura (Universidad Valladolid) as a guest, with the communication "Youth and OTT: Youth Programming on RTP Play and RTVE Play". The session will be held on October 22, at 4.30 pm (UTC +1), on Zoom (link here).

[This talk will be held in Spanish]

Abstract: Over The Top (OTT) platforms have represented a “revolution” (Clares-Gavilán, Merino Álvarez & Neira, 2019) in the audiovisual media scene that has caused a paradigm shift in the concept of television.

Commercial strategies are moving towards an ecosystem in which the television medium plays its future. In this context, the young audience is decisive for the survival of television. They are a new audience that understands television as a medium for individual and flexible consumption.

On the other hand, European public broadcasters have among their functions “to offer a varied, differentiating and comprehensive program that promotes cultural diversity and takes into account the interests of minorities” (RTP).

This research aims to explore the OTT´s programming for young people on Portuguese (RTP) and Spanish (RTVE) public television, and to analyze it to determine if they include perspectives that promote “constitutional values, especially those of freedom, equality, pluralism and tolerance ”(RTVE).

She coordinates the Teaching Innovation Project "Education on gender equality and inclusion" (PID-ENIG) and is a full member of the Gender Studies Committee (CEG) of the University of Valladolid (Spain). He is also a member of the projects "Cultural Produsage in social networks: industry, popular consumption and audiovisual literacy of Spanish youth with a gender perspective" and a research team member in the Group of Recognized Research " History and Media (GIR HISMEDIA)".

The central focal point of her academic research is gender equality and violence, the inclusion of feminism in television in Spain and the narrative in television series. Dra. Etura's work promotes development through mass media to serve as a means of overcoming social gender barriers.

Her work has appeared in a wide range of indexed professional journals and she is also author of De esposas a ciudadanas. Las mujeres en Informe Semanal durante la Transición Democrática 1973-1978 (2020), Textos periodísticos españoles para la historia (2019) and La Comunicación en clave de igualdad de género (2016). She developed the campaign IgualesUVa of the University of Valladolid and is the author of the installation Gender violence is not a story.