For several years a collaborative team of composers, musicians, artists, performers and historians has recreated the experience of magic lantern shows for contemporary audiences. As part of the practice led research Australian Research Council Discovery Project Heritage in the Limelight: The Magic Lantern in Australia and the World we have developed live multimedia performances physically combining new creative elements with actual historical magic lanterns and glass slides. In magic lantern shows audiences sat shoulder to shoulder in the dark and collectively experienced visual and aural effects as transforming images interacted with voice and music. This ubiquitous apparatus formed a media-archaeological substratum to the special effects of today’s media spaces. But for contemporary audiences inured to subsequently developed media thrills, the apparatus’s original experiential power can seem quaint and distant. Therefore, our intention has not been to ‘authentically’ reproduce an historical event, nor to simply add a ‘retro’ flavour to a contemporary multimedia performance, but to develop ways contemporary audiences can reconnect with the original ‘magic’ of the lantern. We have used various strategies to encourage our audiences to reflect on the historical reality of the magic lantern show as an ‘experiential object’. I will examine the new strategies historians and museums need to develop as heritage becomes less tangible and more experiential. When historians are seeking to understand the immersive media experiences of the past in their historical and material specificity, and museum visitors are seeking to engage with their heritage in a more directly experiential way, what can be learnt from our creative, site specific, performances of historical immersive technologies?

Martyn Jolly is an Honorary Associate Professor at the Australian National University School of Art and Design. He completed his PhD on fake photographs and photographic affect at the University of Sydney in 2003. In 2006 his book Faces of the Living Dead: The Belief in Spirit Photography was published by the British Library, as well as in the US and Australia. His work is in the collections of the National Gallery of Australia, the National Gallery of Victoria and the Canberra Museum and Gallery. In 2006 he was one of three artists commissioned to design and build the Act Bushfire Memorial. In 2011 he undertook a Harold White Fellowship at the National Library of Australia and a Collection Scholar Artist in residence Fellowship at the Australian National Film and Sound Archive. In 2014 he received an Australian Research Council Discovery grant along with Dr Daniel Palmer to research the impact of new technology on the curating of Australian art photography. In 2015 he received an Australian Research Council Discovery Grant to lead the international project Heritage in the Limelight: The Magic Lantern in Australia and the World.  Since 2015 he has developed a series of collaborative magic lantern performances around Australia, available on the Heritage in the Limelight website.  In 2020, with Elisa deCourcy he co-edited The Magic Lantern at Work: Witnessing, Persuading, Experiencing and Connecting, and co-authored Empire, Early Photography and Spectacle: the Global Career of Showman Daguerreotypist J. W. Newland, both published by Routledge. His book, co-authored with Daniel Palmer, Installation View: Australian Photography Exhibitions 1848-2020, was published by Perimeter Editions in 2021. He is also researching Australian illustrated magazines, Australiana photobooks, colonial spectacle and modernity, and the history of Australian media art.

‘Sharing vintage and contemporary stereoscopic images with the public’

Abstract: When Charles Wheatstone invented the stereoscope photography had not yet been revealed to the world. When it was, photographers used a camera with a single lens. A lot of them made the most of that unique lens to produce the two perspectives that were necessary to create the illusion of three dimensionality, even after binocular cameras were invented. Some never even had a binocular camera.

With a fast-growing community of modern stereo photographers taking 3-D images with their smartphone, this talk examines the history of sequential stereo photography from the origins of the medium to the present day and how it allowed the capture of depth … and time. In the words of Roland Barthes, cameras really were “clocks for seeing”.

Bio: Denis Pellerin is a photo-historian with a passion for stereo photography. He has been researching and learning about the history of stereoscopy for over 40 years and has written or co-written more than a dozen books and authored over sixty articles on his pet subject, both in French and in English. His latest book “Stereoscopy: the dawn of 3-D” was released in November 2021. Since 2012 Pellerin has been the curator of Dr. Brian May’s extensive collection of stereo photographs, now a charity. Dr. May and Pellerin have co-authored three books together and  Pellerin is working on some new publications while being also deeply involved in the various activities of the London Stereoscopic Company, re-created by Dr. May in 2006. Denis has been the director of the said company since September 2013. Over the past few years he has given over a hundred Zoom and in-person 3-D talks on different aspects of Victorian stereo photography and has lately started investigating stereoscopy in the mid-twentieth century. 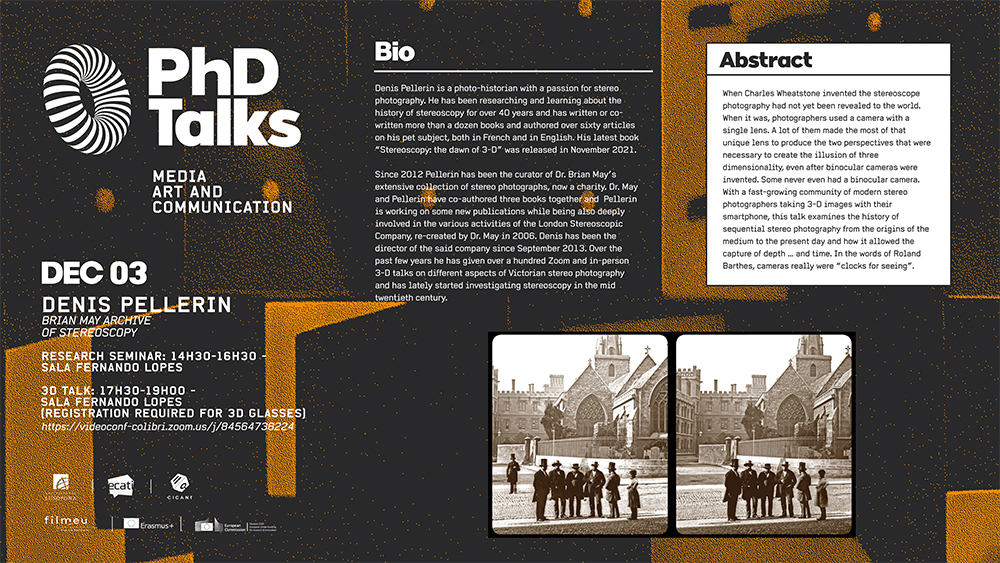 Abstract: While the making of images seems to be longer than recorded history, in the modern era (basically the nineteenth and twentieth century), new  types of images have been created using apparatuses that fundamentally fuse human perception and technology.  These virtual images do not use physical supports in the usual material way (wall, canvases, paper, etc.), but rather construct a viewing device that creates a virtual image with such effects as motion, three dimensionality or illumination – or all three at once. I intend to investigate what a variety of such devices have in common, especially moving images, three- dimensional images and projected images. I will discuss their history and their phenomenology. I will also refer to a number of my essays, including:

“The Transforming Image: The Roots of Animation in Metamorphosis and Motion” in  Pervasive Animation  ed. Suzanne Buchan. (AFI, 2013)

“The Long and Short of it: Centuries of Projecting Shadows From Natural Magic to the Avant-Garde” The Art of Projection ed. Stan Douglas & Christopher Eamon (Ostfildern: Hatje Cantz Verlag, 2009), pp. 23-35.

“Animation and Alienation: Bergson’s Critique of the Cinématographe and the Paradox of Mechanical Motion” The Moving Image Spring 2014, pp. 1-9.

“Hand and Eye: Excavating a New Technology of the Image in the Victorian Era” Victorian Studies Spring 2012, pp. 495-515.

Bio: Tom Gunning works on problems of film style and interpretation, film history and film culture. His published work (approximately one hundred publications) has concentrated on early cinema (from its origins to the WW I) as well as on the culture of modernity from which cinema arose (relating it to still photography, stage melodrama, magic lantern shows, as well as wider cultural concerns such as the tracking of criminals, the World Expositions, and Spiritualism). His concept of the “cinema of attractions” has tried to relate the development of cinema to other forces than storytelling, such as new experiences of space and time in modernity, and an emerging modern visual culture. His book D.W. Griffith and the Origins of American Narrative Film traces the ways film style interacted with new economic structures in the early American film industry and with new tasks of story telling. His forthcoming book on Fritz Lang deals with the systematic nature of the director’s oeuvre and the processes of interpretation. He has written on the Avant-Garde film, both in its European pre-World War I manifestations and the American Avant-Garde film up to the present day. He has also written on genre in Hollywood cinema and on the relation between cinema and technology. The issues of film culture, the historical factors of exhibition and criticism and spectator’s experience throughout film history are recurrent themes in his work.