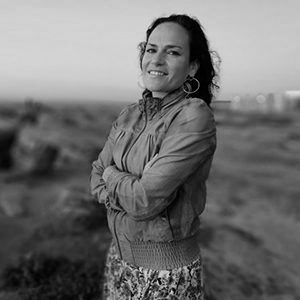 Catarina Patrício (Lisbon, 1980), is a Visual Artist and a Researcher in Contemporary Culture and New Technologies at CICANT.

Patrício holds a PhD in Communication Sciences from FCSH, University Nova of Lisbon, and her research on technics, warfare and cinema was granted with a fellowship provided by Portuguese Foundation for Science and Technology (2009-2014).

Between 2015 and 2020 Patrício was a Post-Doc Fellow at ICNOVA with a FCT grant. With a master in Anthropology of Social Movements, FCSH, University Nova of Lisbon Patrício is graduated in Painting from the Faculty of Fine Arts University of Lisbon (FBA-UL: 1998-2003).

Lecturer of Anthropology of Space at the Architectural Department at Lusófona University of Humanities and Technology (ECATI-ULHT) since 2010, Catarina Patrício develops her activity between artistic practices, teaching and scientific