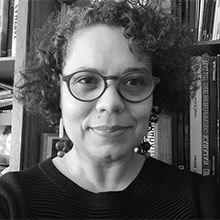 Ciência Vitae
This email address is being protected from spambots. You need JavaScript enabled to view it.
Media Arts Creative Industries and Technology

Her work as a filmmaker granted her a Skillset Millennium Fellowship Award for a series of documentaries on the role of art in the life of refugees. Amongst various roles in the film and television industry, she worked as assistant editor for the BBC series Storyville. She has taught both in the UK and Portugal, and has designed and taught film history, film practice and the history of film censorship courses at Nova’s Summer School.

She was film curator at the Barbican Arts Centre, collaborating with Mike Leigh, Emir Kusturica, John Malkovich, and Kazuo Ishiguro, amongst others, and curating numerous exhibitions and installations by filmmakers and visual artists. She is founding director of UTOPIA - UK Portuguese Film Festival, supported by Instituto Camões, last year celebrating its 11th edition. In 2017 she created Underscore, a festival of music, sound, moving image and archive. Faleiro Rodrigues’ research has recently focused on the Audiovisual Essay, around which theme she organised a symposium in Lisbon in 2019.

In 2020 she secured a grant from ICA in Portugal to direct a documentary on Portuguese pioneer women filmmakers.