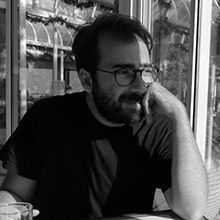 Fuad Halwani is a Lebanese scriptwriter and former film, TV, and theatre instructor. From 2011-2017 Halwani worked in Beirut as a theatre lighting designer, director, and writer. After working at Scenario Beirut on web-dramas for 3 years,

Halwani wrote the mini-series RabihTV (2018), produced by Cinemoz and directed by Mohamed A. Berro (official selection at Series Mania Festival 2018). In 2019 Halwani earned his MA in Screenwriting from KinoEyes, an Erasmus+ joint Masters degree where completed his graduation short film BRUXA along with his dissertation on the contemporary TV anti-hero.

With supported projects currently in development in Lebanon and the MENA region, Halwani is a freelance scriptwriter and PhD in Media Arts candidate at Lusofona University currently residing between Lisbon and Beirut.