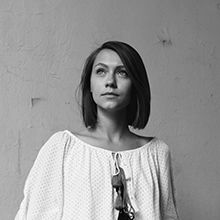 Margaryta Kulichova is a composer, sound designer, music producer and educator. Since 2014 she was releasing music and touring in Europe and USA under the moniker Grisly Faye. Between 2016 and 2018, she worked with the “Festival of Documentary Film and Urbanism 86” in Slavutych city (UA, Chernobyl area). She composed for the festival trailers, held sound workshops for teenagers and directed special music events, such as outdoor show with the organ and electronics and opening ceremony with the Military Orchestra.

In 2018, she participated in an exchange program for musicians called OneBeat (USA) where she was producing music, touring and working with teenagers in rapidly gentrifying communities, set up site-specific performances, street studios, and other kinds of music-based educational activities.

She composed and sound designed the feature documentary “Heat Singers” about the amateur choir of a company that provides central heating to a Ukrainian City.

It premiered at Visions Du Reel in 2019 and in 2020 was nominated for the best score and won the best documentary award from the Ukrainian Film Institute.

In 2020 she graduated from the KinoEyes European Movie Masters, and currently working on PhD at Universidade Lusófona de Humanidades e Tecnologias.