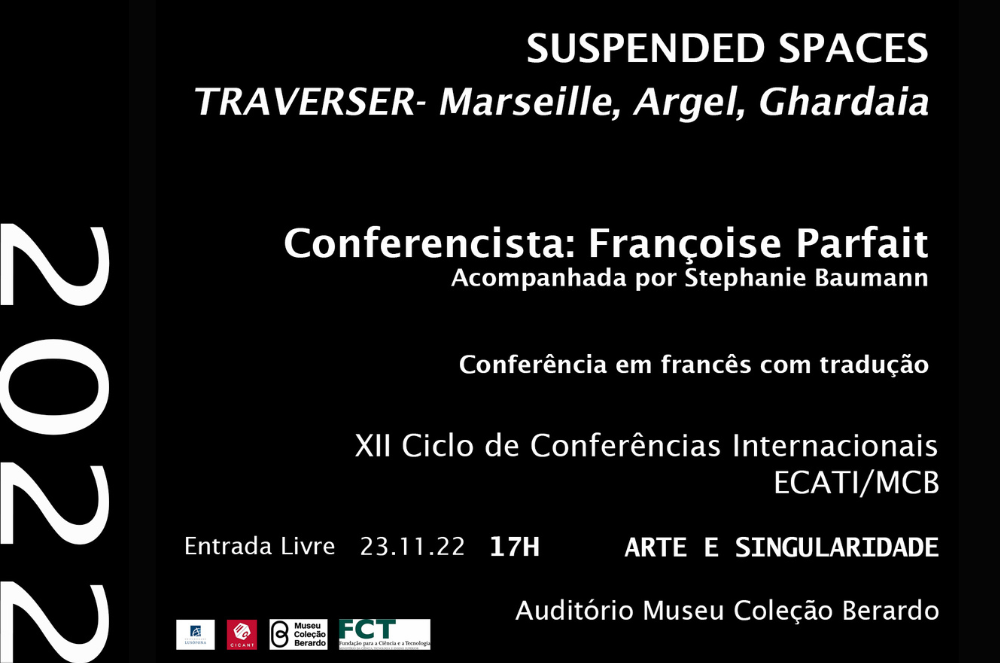 On the 23rd of November, 17h00, will take place at Museu Coleção Berardo Auditorium, the conference Suspended Places - Traverser - Marseille/Argel/Ghardaïa. Françoise Parfait is the invited speaker and will be accompanied by Stefanie Baumann.  The conference will be held in French (with simultaneous translation).

The Suspended Spaces collective proposes to work on the idea of crossing, of going towards, towards a journey that we will imagine, prepare, document, for which we will seek out crossing points, stories, witnesses. We will insist on the path, mental or literal, direct or deviated. The Traverser project begins in Marseille, the most Algerian of French cities. From the port, the lines extend to the Ghardaïa architecture that inspired modernity, fascinated Le Corbusier, crossed paths with Fernand Pouillon, and attracted André Ravéreau. In the M'zab valley, the city founded by the Ibadites, populated mainly by Mozabites who perpetuate a unique social organization there, constitutes a historical and cultural heritage that might seem impermeable to the world. Another place. An island. This spatial and temporal distance that Ghardaïa may embody in Marseille as much as in Algiers, however, contradicts what the Sahara has become: a strategic global, sensitive space where life projects, political and economic battles take place, which determine a part of our societies, and what is happening here. The region is the scene of geopolitical and ecological tensions, of individual dramas. The desert and the Mediterranean Sea are spaces of crossings that imply destinations. To think of a trip to Algeria from Marseille is also to return, once again, to the relationship between these two countries, marked by amnesia and suspended memories. There are stories to stir, reminding us that "to cross" comes from the Latin transversare, "to stir by stirring."

Françoise Parfait is Professor Emeritus in Arts and Media at Paris 1 Panthéon-Sorbonne. Artist. Authored several texts on video and temporal images, as well as their reception (Vidéo: un art contemporain, Regard, 2001; catalog Collection Nouveaux Médias/Installations, Centre Pompidou / Musée national d'art moderne, 2006; catalog David Claerbout - The Shape of Time, JRP/Ringier, 2008). She is a founding member of the Collective Suspended Spaces (2007) an arts research platform interested in geopolitical spaces inherited from modernity and whose history and future are "uncertain". She co-edited four publications on projects. She is a member of AICA (International Association of Art Critics).