CICANT integrated researchers in the "Rhetoric, Literature and Culture" colloquium, held by UBI 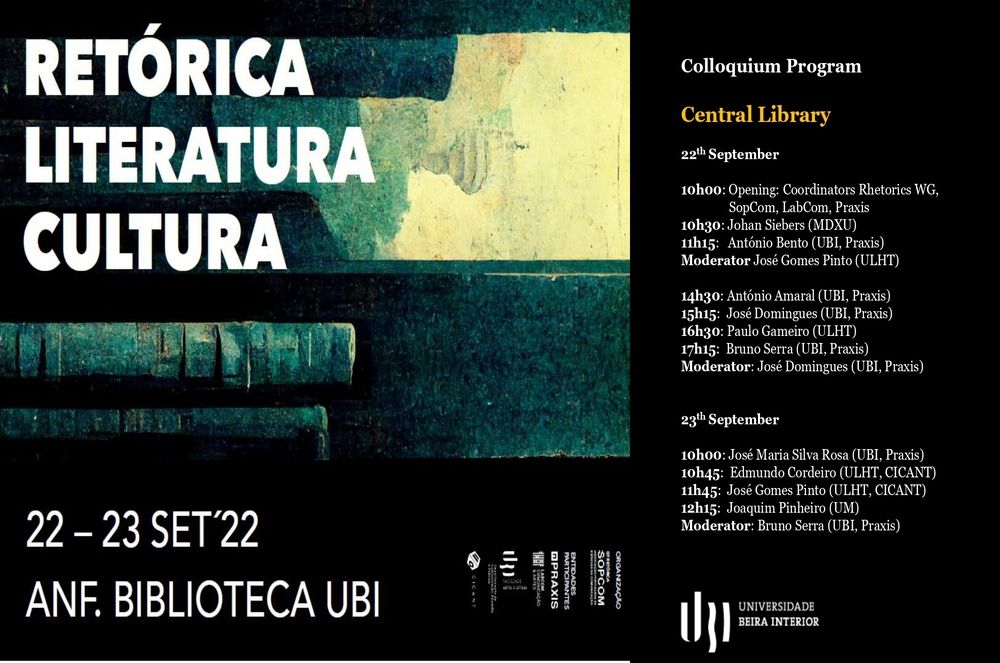 On the next 22 and 23 September, the Library Amphitheatre of the University of Beira Interior will host the Colloquium "Rhetoric, Literature, Culture". Among the speakers are José Gomes Pinto and Edmundo Cordeiro, both integrated researchers of CICANT. The event is scheduled to begin at 10 a.m., with the opening session. The first interventions, by Johan Siebers, from Middlesex University, and António Bento, from the University of Beira Interior, will be chaired by José Gomes Pinto. The afternoon panel will bring together António Amaral, José Domingues, Bruno Serra (UBI, Praxis) and Paulo Gameiro, from Lusófona University. The second day of the event will feature interventions by José Maria Silva Rosa (UBI, Praxis), Edmundo Cordeiro and José Gomes Pinto (CICANT/Univ. Lusófona) and Joaquim Pinheiro (UM), moderated by Bruno Serra (UBI, Praxis).

Under discussion will be the remarkable historical link existing between Rhetoric, literature, and culture, which includes the present-times itself, as it will be uncovered, is the element that constitutes the justification of the theme of the conference, which seeks to analyze the specific links of classical rhetoric in contemporary culture and presenting itself as a posthumous tribute to the great thinker George Steiner, whose work deals in this intersection. If the internal logic of the argument was the one that gave the guidelines to the study of Rhetoric, when taken not only as a technique but also as a method, it began to penetrate fields that were foreign to it in the classical period.  The consequences of this, will be assessed during the meeting, led Rhetoric to go through wider fields, into much broader territories that are not limited to the way classical doing, but also to the way in which these new forms of language access demarcates a new identity: the textual identity, the identity of its author, the identity of a historical epoch, the identity of its own way of making oneself. It will be in this double meaning, and on these two aspects, that we will try to update the meaning and use of Rhetoric. The event's organisation aims for an intimate, face-to-face, argumentation to pinpoint what Rhetoric is in the present days and which outcomes we can expect from its inception to the modern world. We often realize that Rhetoric is taken as a mere instrumental technic, nonetheless, important philosophical problems are concealed behind this common meaning.

The Rhetoric, Literature and Culture Colloquium is an event jointly organized with the Rhetoric Working Group of the Portuguese Association of Communication Sciences (SOPCOM), LabCom, Praxis, UBI and CICANT, of Lusófona University.